Whatever business endeavors Kanye West is working on aren’t big enough to stop him from partying down. On the evening of September 13, Ye hosted an impromptu YEEZY party at the tail end of New York Fashion Week, offering celebrity fans an opportunity to test out his coveted YEEZY GAP SHDZ sunglasses.

Kanye was initially spotted on September 12 at a celeb-heavy NYFW event, which Highsnobiety editor-in-chief Willa Bennett captured in an exclusive video.

Ye wore this look a lot earlier this year, especially while he was dating Julia Fox, though he dropped off in favor of sleeveless hoodies and the occasional pair of YEEZY sneakers. Looks like he’s back on his bullshit, as the kids say, though he’s now sporting a rare beard.

From there, it was time to party.

The following night, September 13, Kanye hosted a gathering with several dozen A-list pals, including Kaytranada, Winnie Harlow, and Chris Rock, who was all too pleased to pose with Ye and the various models who’d been invited.

While Kanye wore the same clothes from September 12, everyone else was in their futuristic YEEZY GAP best, complete with pairs of Kanye’s thus-unreleased YEEZY GAP SHDZ, the frameless sunglasses he’s been teasing on Instagram since earlier this summer.

Most recently, Ye’s enigmatic YEEZY Instagram account expanded beyond the campaign images it’s been uploading for the past few weeks with imagery of model Candice Swanepool wearing the SHDZ in stylized shots lensed by frequent Kanye contributor Nick Knight.

The promotional blitz hints that the YEEZY GAP sunglasses will launch soon, though there’s been no official confirmation of any details regarding drop date or price.

Highsnobiety has reached out to YEEZY representatives for more information.

However, if you’ve spent your September under a rock, you might’ve missed the major Ye news of the week: Kanye announced YEEZY’s eventual departure from adidas and GAP at the end of each company’s respective contract, which may still be a few years off.

Assuming that’s indeed the case, this NYFW activation may be the one of the last big YEEZY GAP moments for some time, even given the big YEEZY GAP summer we collectively endured.

It wouldn’t be a bad way to end the partnership, what with this big Fashion Week event under his belt and YEEZY GAP on the cover of Quavo and Takeoff’s new album, Only Built For Infinity Links.

Oh, and Pete Davidson wore a Kanye-like outfit at the Emmys on September 12, but that ain’t here nor there.

For now, the main takeaways of Kanye’s surprise NYFW party are this: he’s suited and literally booted in his old uniform, he’s got a big ol’ beard, and the YEEZY GAP SHDZ glasses may get a release date sooner rather than later. 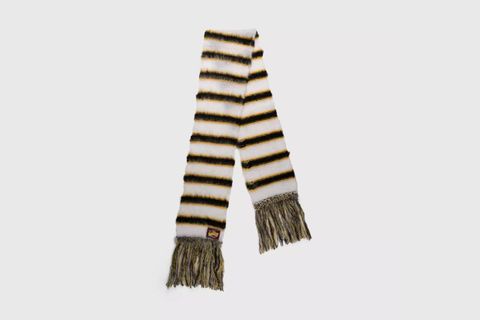